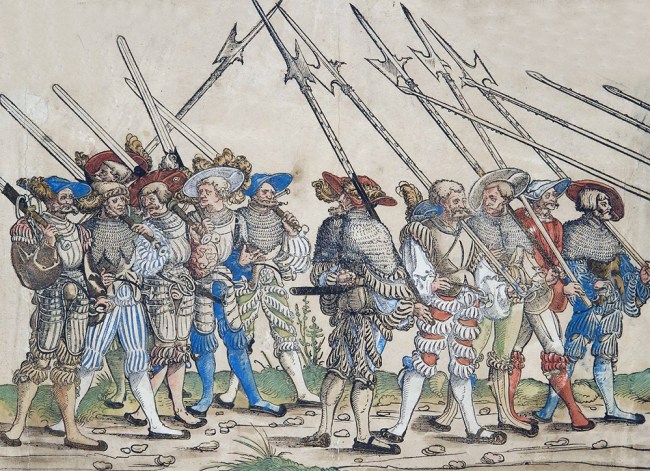 This is the subject of David Parrott’s The Business of War: Military Enterprise and Military Revolution in Early Modern Europe. It is a revisionist look at the role mercenaries—or more broadly, military contractors—played in the evolution of European armies from feudal levies to organs of the centralized state. It challenges the conventional notion that their widespread use in the early modern period was an aberration, showing instead how they played an integral part in the evolution of both modern armies and the centralized state.

Military enterprise had always played a role on European battlefields, but the 16th century saw many innovations. Contractor-colonels extended their own resources and credit to finance the raising of regiments and drew on their personal connections to man them. Governments experimented with a variety of financing schemes as wars became more frequent and protracted, allowing them to reliably call on large numbers of troops when needed. Beyond the recruiting and equipping of regiments of combat-ready troops, monarchs also relied on military enterprise to supply provisions, ammunition, ships, and clothing. In this light, conventional assessments of early modern military contractors appear to be ex post facto judgments that ignore the actual concerns of the time. Not only were early modern bureaucracies unable to recruit much larger armies on their own, but even if they could, they would have a hard time supplying them. Contractors’ great value was their ability to tap into local markets and networks of merchants, manufacturers, and financiers that would otherwise be inaccessible.

As a competitive market, military contracting of all types was subject to market forces. The Thirty Years’ War in particular placed a huge premium on experienced troops, which saw a dramatic increase in experienced soldiers’ wages. Contracts themselves also became the object of speculation: massive Swedish and Habsburg spending fueled a run of contractor-colonels who raised regiments on their own credit, hoping to recover large profits from future conquests. This massive bubble drove the most destructive phase of the war, as commanders had to squeeze occupied territories ever more to recover their expenses; the bursting of the bubble in 1634, following the deaths of Gustavus Adolphus and Wallenstein, brought a general financial reckoning and a great reduction in army sizes.

Despite the competition for soldiers and provisions, contractors themselves were not as fickle or avaricious as often represented. Efficient delivery at reasonable cost was rewarded with continued business, giving contractors a long-term incentive to develop their relationship with a particular warlord—mercenaries were not especially mercenary. Their stake in the war effort also made them much more effective in battle than commonly credited. Indeed, if the two fundamental roles of an organization are to align incentives and coordinate action, then the nexus of state authorities coupled with private contractors was far more effective than what would otherwise be possible.

Parrott also shows how the economics of contracting had an effect on strategy itself. The more developed administrations of France and Spain preferred to negotiate large-scale supply contracts for the entire army. Centralized control and economies of scale came at the expense of flexible distribution, however, and campaigns were often restricted to besieging fortresses within the limited area of the frontier. The smaller armies of post-1634 Germany, by contrast, negotiated their own supply contracts. This made them far more responsive to local conditions, allowing commanders to undertake daring campaigns of deep maneuver that would not be seen again in Europe for at least another hundred years.

Parrott concludes with a discussion of developments after 1650. Despite the rhetoric of absolute monarchs, most states continued to use contractors for both the raising and provisioning of troops. Louis XIV’s France was the great exception, where officers were more employees of the state than proprietary stakeholders in their units. Yet even the Sun King had to contend with the dynamics that drove military enterprise in the first place. The enormous cost his wars meant that he simply could not raise the necessary capital without the buy-in of the aristocracy: consequently, the army overlooked the sale of offices from one unit commander to the next, it being the only way to incentivize commanders to invest in their units. While other states gradually adopted the French example over the 18th century, this coincided with a boom in supply and service contracts that belies the conventional narrative of centralization. In the end it was not the increasing assertiveness of monarchs, but the levée en masse of the French Revolution, that brought European armies fully under state control.

The Business of War is a fascinating book from a number of perspectives. It is a useful and much-needed addition to our understanding of state-formation in the early modern period. From a purely military perspective, it provides invaluable context for understanding warfare in the period and the constraints its commanders were under. Finally, it is a useful for understanding military contracting in general, fleshing out the problems and considerations entailed by military enterprise of any period. An extensive bibliography and notes provide a jumping-off point for further research, and an engaging style makes it accessible to specialists and casual readers alike. Highly recommended.